The Effects of Mindfulness and Meditation on the Cingulate Cortex in the Healthy Human Brain: A Review | mijn-bsl Skip to main content
TOOLBAR 1 2 3 4
ZOEKEN MENU 1 2 3 4

Neuroimaging-based research has revealed varying effects of meditation/mindfulness in sections of the cingulate cortex. However, a formal review of this literature is currently missing.

Of the 49 studies published over the last two decades, the majority were cross-sectional in nature (69%) and employed fMRI (61%). Most studies reported significant effects in the anterior cingulate cortex (55%), followed by the posterior cingulate cortex (49%) and the midcingulate cortex (20%). However, the nature of findings was extremely heterogeneous across studies, possibly due to a substantial variability in terms of study designs, sample sizes, demographics, meditation styles, cingulate subdivisions, and nomenclatures, just to name a few.

Altogether, the outcomes of this review suggest a multifaceted role of the cingulate for processes related to long-term meditation practices, short-term meditation trainings, as well as trait mindfulness.

Titel
The Effects of Mindfulness and Meditation on the Cingulate Cortex in the Healthy Human Brain: A Review
Auteurs:
Sara E. Zsadanyi
Florian Kurth
Eileen Luders 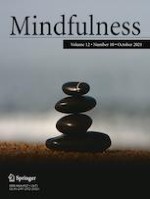 Correction to: Somatics of Early Buddhist Mindfulness and How to Face Anxiety

Correction to: Meditation Maps, Attainment Claims, and the Adversities of Mindfulness

Correction to: Once Again on External Mindfulness

Correction to: Early Buddhist Oral Transmission and the Problem of Accurate Source Monitoring