Working memory is one of several putative core neurocognitive processes in attention-deficit/hyperactivity disorder (ADHD). The present work seeks to determine whether visual–spatial working memory is sensitive to motivational incentives, a laboratory analogue of behavioral treatment. Participants were 21 children (ages 7–10) with a diagnosis of ADHD-combined type. Participants completed a computerized spatial span task designed to assess storage of visual–spatial information (forward span) and manipulation of the stored information (backward span). The spatial span task was completed twice on the same day, once with a performance-based incentive (trial-wise feedback and points redeemable for prizes) and once without incentives. Participants performed significantly better on the backward span when rewarded for correct responses, compared to the no incentive condition. However, incentives had no effect on performance during the forward span. These findings may suggest the use of motivational incentives improved manipulation, but not storage, of visual–spatial information among children with ADHD. Possible explanations for the differential incentive effects are discussed, including the possibility that incentives prevented a vigilance decrement as task difficulty and time on task increased. 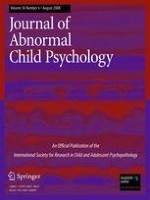 Intent Attributions and Aggression: A Study of Children and their Parents

Is Parental Knowledge of their Adolescent Offspring’s Whereabouts and Peer Associations Spuriously Associated with Offspring Delinquency?