The majority of mindfulness intervention studies do not include active control groups. To examine potential unique effects of mindfulness practice and to study the mechanism responsible for beneficial mental health effects associated with mindfulness-based interventions, the present study compared mindfulness meditation with an active control group in a randomised controlled trial. A short-term mindfulness-based intervention (n = 46) was compared with both an active control group—relaxation training (n = 40)—and an inactive wait-list group (n = 40) on self-reported mindfulness and decentering, executive attention, psychological well-being, anxiety, depression, and coping style, in an adult working population with no prior meditation experience. Analyses of covariance showed that the mindfulness group scored higher than the wait-list group on self-reported mindfulness and psychological well-being. However, no differences were found on decentering, anxiety, depression, executive attention, or coping style. Moreover, the study failed to distinguish any unique mindfulness effects since there were no differences between mindfulness and relaxation on any of the variables. Simple mediation analyses, using a bootstrap approach, revealed that decentering acted as a mediator between self-reported mindfulness and psychological well-being. The length of the intervention, the similarities between body scan exercises in MBI and relaxation, and the absence of decentering effects may partly explain the lack of distinct MBI effects, suggesting that MBIs aimed at increasing well-being and problem-focused coping whilst reducing psychological symptoms in a working population should be longer than merely 4 weeks and include more than seven sessions.
vorige artikel Mindfulness Based Cognitive Therapy for Mental Health Professionals: A Long-Term Qualitative Follow-up Study
volgende artikel Leading Mindfully: Two Studies on the Influence of Supervisor Trait Mindfulness on Employee Well-Being and Performance 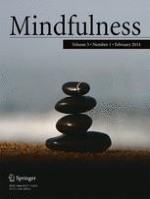 On the Relation Between Mindfulness and Depressive Symptoms: Rumination as a Possible Mediator

Leading Mindfully: Two Studies on the Influence of Supervisor Trait Mindfulness on Employee Well-Being and Performance