While the link between parenting and delinquency is well established, there is less consensus among scholars with regards to the processes that account for this link. The current study had two objectives. The first was to disentangle the effects of African American parents’ use of corporal punishment and verbal abuse on the conduct problems of their preteen children. The second was to investigate the mechanisms that explain this relationship, such as having low self-control or a hostile view of relationships, whereby these harsh parenting practices increase a youth’s involvement in problem behavior. Further, we are interested in specifically addressing how these mechanisms may operate differently for males versus females. Analyses utilized structural equation modeling and longitudinal data spanning approximately 2.5 years from a sample of 704 (54.2 % female) African American children ages 10–12. The results indicated that verbal abuse was a more important predictor of conduct problems than corporal punishment. Additionally, we found that the mechanisms that mediated the impact of verbal abuse and corporal punishment on conduct problems varied by gender. For males, most of the effect of verbal abuse was mediated by low self-control, whereas anger/frustration was the primary mediator for females. Implications of these results and directions for future study are also discussed. 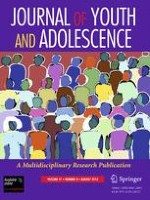 Inflexible Parents, Inflexible Kids: A 6-Year Longitudinal Study of Parenting Style and the Development of Psychological Flexibility in Adolescents

Parent and Peer Pathways to Adolescent Delinquency: Variations by Ethnicity and Neighborhood Context

The Stress Response and Adolescents’ Adjustment: The Impact of Child Maltreatment