In immigration enforcement, many undocumented immigrants with children are often detained and deported. But it is their US-born citizen-children that have been overlooked in immigration debates and enforcement policies and practices. Citizen-children are at risk for negative psychological outcomes when families are fractured and destabilized by arrest, detention, and deportation. The children risk being torn from their parents and, often, their undocumented siblings. To add to the small but growing empirical base on the effects of living under the threat of deportation and actual deportation of parents, we compared the psychological status of three groups of citizen-children: (1) a group living in Mexico with their deported parents; (2) a group in the US with parents affected by detention or deportation; and (3) a comparison group of citizen-children whose undocumented parents were not affected by detention or deportation. We compared children on self-report and parent-report measures of behavioral adjustment, depression, anxiety, and self-concept. Across the three groups we found elevated levels of distress, and differences between children who had experienced a parent’s detention or deportation and those who had not. We discuss findings in the context of children’s clinical needs, future research, and implications for immigration enforcement policy and practices.
vorige artikel The Potential Benefits of Parenting Programs for Grandparents: Recommendations and Clinical Implications
volgende artikel The Overlap between School Bullying Perpetration and Victimization: Assessing the Psychological, Familial, and School Factors of Chinese Adolescents in Hong Kong 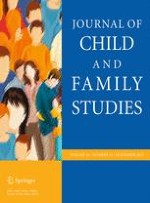 Family Relationships and Parenting Practices: A Pathway to Adolescents’ Collectivist and Individualist Values?

Bullying and Victimization, Depressive Mood, and Non-Suicidal Self-Injury in Adolescents: The Moderating Role of Parental Support

Associations Between Proactive and Reactive Aggression, Parenting Styles, and Externalizing Symptomatology in Children Admitted to a Psychiatric Inpatient Unit