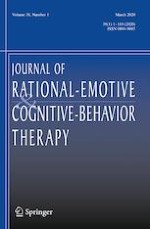 How to Differentiate Generalized Anxiety Disorder from Worry: The Role of Cognitive Strategies

Examining the Mediating Role of Stress in the Relationship Between Mindfulness and Depression and Anxiety: Testing the Mindfulness Stress-Buffering Model

A Network Approach to Depressive Disorders