A subtype of the posttraumatic stress disorder diagnosis for children 6 years and younger (PTSD-6Y) was introduced in the Diagnostic and Statistical Manual, Fifth Edition (DSM-5). This study utilized confirmatory factor analytic techniques to evaluate the proposed DSM-5 PTSD-6Y factor structure and criterion and convergent validity against competing models. Data for N = 284 (3–6 years) trauma-exposed young children living in New Orleans were recruited following a range of traumas, including medical emergencies, exposure to Hurricane Katrina and repeated exposure to domestic violence. The model was compared to DSM-IV, a 4-factor ‘dysphoria’ model that groups symptoms also associated with anxiety and depression, and alternate 1- and 2- factor models. Convergent validity was established against the Child Behavior Checklist (CBCL). Criterion related validity was established by comparing each model to a categorical rating of impairment. The Dysphoria and PTSD-6Y models offered the better accounts of symptom structure, although neither satisfied minimum requirements for a good fitting model. These two models also only showed small levels of convergence with CBCL dimensions. The 1-factor model offered the most compelling balance of sensitivity and specificity, with the 2-factor model and the Dysphoria model following closely behind. These CFA results do not support the symptom clusters proposed within the DSM-5 for PTSD-6Y. Although a 4-factor Dysphoria model offers a better overall account of clustering patterns (relative to alternate models), alongside acceptable sensitivity and specificity for detecting clinical impairment, it also falls short of being an adequate model in this younger age group. 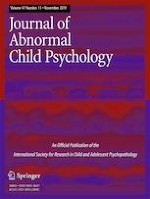 Reactive and Regulatory Temperament: Longitudinal Associations with Internalizing and Externalizing Symptoms through Childhood

The Intergenerational Transmission of Externalizing Behavior: the Importance of a Positive Romantic Partner