Cognitive and language skills of 39 siblings of children with autism (SIBS-A) and 39 siblings of typically developing children (SIBS-TD) at ages 4, 14, 24, 36, and 54 months were compared. Twelve of the 39 SIBS-A revealed a delay in cognition and/or language (including one child diagnosed with autism) compared to only two SIBS-TD. Developmental trajectories revealed that the cognitive differences disappeared by age 54 months, but some differences in language ability remained. Thus, most SIBS-A were well-functioning, but some revealed cognitive and/or language difficulties during the preschool years. Even these siblings by and large caught up by the age of 54 months, with receptive and expressive language abilities remaining an area of difficulty for some earlier identified siblings.
vorige artikel Variation in Vocal-Motor Development in Infant Siblings of Children with Autism
volgende artikel Request for Proposals Primary Research Program 2007 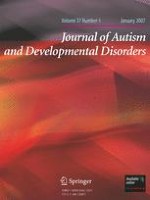 Early Social and Emotional Communication in the Infant Siblings of Children with Autism Spectrum Disorders: An Examination of the Broad Phenotype