The study develops and evaluates the interpersonal problem-solving inventory for elementary school students (IPSI). In particular, the study employs a multidimensional interpersonal problem-solving model that is based on the cognitive-affective-behavioral approach to construct a process measure of interpersonal problem-solving inventory for 4th and 5th grade students, especially for elementary school settings in Vietnam. The inventory is a 4-point Likert-type scale consisting of 44 items and five dimensions. The IPSI was administered to a total elementary student sample that consisted of 786 Vietnamese elementary students in fourth and fifth grades (ages: 9–12, M = 10.11, SD = 0.75). The reliability of the IPSI was reported (Cronbach’s α = 0.90; McDonald’s ω = 0.82). EFA was conducted on the first dataset to explore the emerging factor structure of the IPSI. The EFA results suggested an exclusive five-factor solution. CFA was examined on the second dataset to define the theory-driven five-factor structure of the IPSI. The CFA findings indicated that the IPSI consented to the five-factor structure as similar as the EFA results. The assessment of the five-factor model endorsed that five of the six global fit indices (χ2/df = 1.406 < 2, P < 0.001; CFI = 0.928; TLI = 0.924; GFI = 0.875; RMSEA = 0.032 < 0.05; and SRMR = 0.049 < 0.05) are statistically acceptable, suggesting a good fitting model. The results suggest that the scale has acceptable internal reliability and construct validity. Applicability and limitations of the IPSI are discussed. Subsequent studies and possible improvements are proposed.
vorige artikel Behavioral Improvements but Limited Change in Callous-Unemotional Traits in Adolescents Treated for Conduct Problems
volgende artikel Positive Parenting Scale (E2P): Evidence of Validity and Reliability in a Chilean Sample 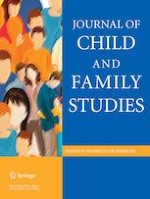 The Impact of an Intensive Summer Treatment Program for Adolescents with ADHD: A Qualitative Study of Parent and Young Adult Perspectives

Positive Parenting Scale (E2P): Evidence of Validity and Reliability in a Chilean Sample

“They Just Keep Coming”: A Study of How Anti-Black Racial Violence Informs Racial Grief and Resistance Among Black Mothers