Assessment and diagnosis of adult attention deficit/hyperactivity disorder (ADHD) is complex, involving multiple tasks and several sources of information. The suitability of the instruments needs to be tested in the cultural context in which they will be applied. This study validates the Catalan adaptation of the Conners Adult ADHD Rating Scales-Long Version (CAARS: L), in both its self-report and observer forms. The sample comprised 606 participants. Confirmatory factor analysis was used to test the dimensional structure. Reliability was analysed in terms of internal consistency, test-retest and informant agreement. Age and gender differences were studied, and differential item functioning (DIF) in relation to these variables was tested. Results show that the four-factor model (i.e., Inattention/Memory Problems, Hyperactivity/Restlessness, Impulsivity/Emotional Lability, and Problems with Self-Concept), similar to the original version, presented an adequate fit for both forms. Internal consistency and test-retest correlations reached very high values for the two forms, and informant agreement was high at both test and retest. There were significant gender and age differences that were not due to bias in the measurement instrument, since no item showed differential behaviour with respect to these two variables. The Catalan versions of the CAARS: L present adequate validity and reliability, and they can therefore be used for diagnostic purposes and cross-cultural comparisons.
vorige artikel Adult ADHD: Associations with Personality and Other Psychopathology
volgende artikel Parent Management of Organization, Time Management, and Planning Deficits among Adolescents with ADHD 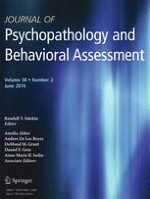 Erratum to: Parent Management of Organization, Time Management, and Planning Deficits among Adolescents with ADHD

A Comparison of Repetitive Negative Thinking and Post-Event Processing in the Prediction of Maladaptive Social-Evaluative Beliefs: A Short-Term Prospective Study