In 2002/2003, the National Epidemiologic Database for the Study of Autism in Canada started capturing information on children diagnosed with autism in different regions of the country. Based on data collected through 2008 in Newfoundland and Labrador and 2010 in Prince Edward Island and Southeastern Ontario, the estimated average annual percent increases in prevalence among children 2–14 years of age ranged from 9.7 % (95 % CI 7.8–11.6) to 14.6 % (95 % CI 11.3–18.0). Differential in-migration and identification of previously undetected cases may have contributed in part to the increases observed, but we cannot rule out the possibility of a true increase in incidence, particularly given the lack of a leveling-off of prevalence among the 6- to 9-year olds.
vorige artikel An Investigation of the “Jumping to Conclusions” Data-Gathering Bias and Paranoid Thoughts in Asperger Syndrome
volgende artikel Brain Routes for Reading in Adults with and without Autism: EMEG Evidence 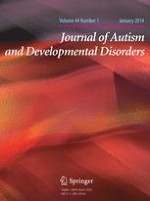 Virtual and Concrete Manipulatives: A Comparison of Approaches for Solving Mathematics Problems for Students with Autism Spectrum Disorder