Cognitive models of social phobia postulate that attentional biases for threat play an important role in the maintenance of this disorder (e.g., Clark 2001). Consistent with this idea, studies have demonstrated that training social phobics to attend to non-threatening stimuli results in clinical benefits (Amir et al. in J Abnorm Psychol 117:860–868, 2008). However, no study has directly examined the causal status of selective attentional bias in social phobia. The present study explicitly investigated this issue. We used an experimental design similar to MacLeod et al. (J Abnorm Psychol 111:107–123, 2002), which involved two consecutive experimental phases: an attentional bias induction phase and a stress phase. During the attentional bias induction, participants completed modified versions of a dot-probe task; for half of the participants the task was designed to induce a biased attentional response for faces expressing disgust, for the other half, the task induced no bias. Then, all participants were exposed to a task inducing social rejection. Results indicate that the induction of an attentional bias for threatening information resulted in increased anxiety during social rejection. Implications for cognitive models of social phobia are discussed. 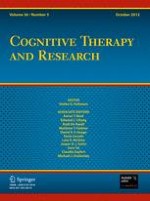 Too Much of a Good Thing: Testing the Efficacy of a Cognitive Bias Modification Task for Cognitively Vulnerable Individuals

The Efficacy of Cognitive Behavioral Therapy: A Review of Meta-analyses