The Boundaries of the Cognitive Phenotype of Autism: Theory of Mind, Central Coherence and Ambiguous Figure Perception in Young People with Autistic Traits | mijn-bsl Skip to main content
ZOEKEN MENU 1 2 3 4

Theory of Mind, Weak Central Coherence and executive dysfunction, were investigated as a function of behavioural markers of autism. This was irrespective of the presence or absence of a diagnosis of an autistic spectrum disorder. Sixty young people completed the Social Communication Questionnaire (SCQ), false belief tests, the block design test, viewed visual illusions and an ambiguous figure. A logistic regression was performed and it was found that Theory of Mind, central coherence and ambiguous figure variables significantly contributed to prediction of behavioural markers of autism. These findings provide support for the continuum hypothesis of autism. That is, mild autistic behavioural traits are distributed through the population and these behavioural traits may have the same underlying cognitive determinants as autistic disorder.
vorige artikel The Modified Checklist for Autism in Toddlers: A Follow-up Study Investigating the Early Detection of Autism Spectrum Disorders
volgende artikel Reduced Bone Cortical Thickness in Boys with Autism or Autism Spectrum Disorder 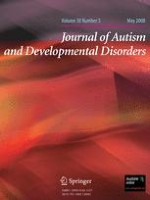