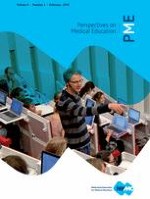 Paediatric trainees and end-of-life care: a needs assessment for a formal educational intervention

Qualitative and quantitative: the yin and the yang or the light and the dark sides of medical education?

Peer-teaching: an important skill for all medical students and doctors?

Who are we? A qualitative evaluation of trainees’ perspectives on professional identity in oral and maxillofacial surgery