Questions persist about whether attention deficit hyperactivity disorder (ADHD), oppositional defiant disorder (ODD), and conduct disorder are in fact distinct from one another. When such questions arise, ODD is often suggested to be subsumed under one or the other condition. Modeling approaches that can evaluate whether specific subfactors can be distinguished from general psychopathology are of great interest, and the general bifactor model has been increasingly applied in studies evaluating the structure of psychopathology. However, evidence for bias in the model, the frequency of anomalous indicators, and theoretical concerns about the applicability of the general bifactor model to these questions raise doubts about whether it is reliable or appropriate to do so. Burns and colleagues propose the bifactor S-1 model as a psychometrically sounder alternative. Their systematic examination provides a compelling argument that it is psychometrically sounder, but it is not clear that it is a true alternative. It may not be answering the same questions, cannot test hypotheses regarding the same sets of specific subfactors, and relies on a priori decisions on the part of the researcher that may change the interpretation of the results. The bifactor S-1 model approach appears to be a valuable, psychometrically sound approach to test the structure of psychopathology, particularly in regard to ADHD and ODD. 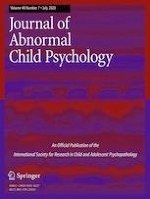 Application of the Bifactor S – 1 Model to Multisource Ratings of ADHD/ODD Symptoms: an Appropriate Bifactor Model for Symptom Ratings