Data were collected in 2011 and 2017 from the Hertfordshire Cohort Study. In 2011, we assessed social isolation using the six-item Lubben Social Network Scale (LSNS-6) and the Maastricht Social Participation Profile (MSSP) and depressive and anxiety symptoms using the Hospital Anxiety and Depression Scale (HADS). Physical capability was assessed by performing tests of gait speed, chair stands, timed up and go and balance at both time points. BMD was assessed using dual X-ray absorptiometry (DXA) at both time points.

Social isolation was associated with higher odds of having depressive symptoms and predicted the development of poor physical capability 6 years later. Further longitudinal studies that include loneliness as a covariate are warranted. 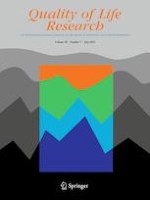 Trajectories of health-related quality of life in children of parents with mental health problems: results of the BELLA study

The prediction of mortality by quality of life assessed with the WHOQOL-BREF: a longitudinal analysis at the domain and item levels using a seven-year follow-up period

Comparison of the anxiety, depression and their relationship to quality of life among adult acute leukemia patients and their family caregivers: a cross-sectional study in China