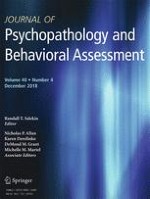 Subtypes of Adaptive and Maladaptive Perfectionism in Anorexia Nervosa: Associations with Eating Disorder and Affective Symptoms