Callous-unemotional (CU) traits have been associated with problems in behavioral adjustment in past research which has led to proposals to include them in diagnostic classification systems for child behavior problems. In the current study, the factor structure of a comprehensive measure of CU traits was tested in a sample of 540 Italian children in grades 6 and 8. Consistent with past factor analyses in other countries, CU traits could be described as having three subfactors (i.e., callousness, uncaring, unemotional) which load on an overarching general factor. Importantly, this factor structure was invariant across gender and grade. Consistent with past studies, CU traits were positively associated with school behavior problems, bullying, and reactive aggression and this was largely accounted for by the callousness and uncaring subscales. The current results advance past work in showing that these associations extend to cyberbullying and to bullying reported by both self-report and by peer nominations. Further, CU traits were also associated with lower levels of academic achievement, and this was also largely accounted for by the callousness and uncaring dimensions. Finally, although the unemotional subscale did not show consistent associations with problems in behavioral or academic adjustment, it did contribute independently to the prediction (negatively) of peer-reported prosocial behaviors. 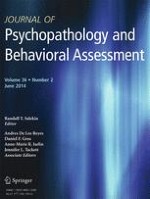