Preschool children have long been a neglected population in the study of psychopathology. The Achenbach System of Empirically Based Assessment (ASEBA), which includes the Child Behavior Checklist/1.5-5 (CBCL/1.5-5) and the Caregiver-Teacher Report Form (C-TRF), constitutes the few available measures to assess preschoolers with an empirically derived taxonomy of preschool psychopathology. However, the utility of the measures and their taxonomy of preschool psychopathology to the Chinese is largely unknown and has not been studied. The present study aimed at testing the cross-cultural factorial validity of the CBCL/1.5-5 and C-TRF, as well as the applicability of the taxonomy of preschool psychopathology they embody, to Mainland Chinese preschoolers. Country effects between our Chinese sample and the original U.S. sample, gender differences, and cross-informant agreement between teachers and parents were also to be examined. A Chinese version of the CBCL/1.5-5 and C-TRF was completed by parents and teachers respectively on 876 preschoolers in Mainland China. Confirmatory factor analysis (CFA) confirmed the original, U.S.-derived second order, multi-factor model best fit the Chinese preschool data of the CBCL/1.5-5 and C-TRF. Rates of total behavior problems in Chinese preschoolers were largely similar to those in American preschoolers. Specifically, Chinese preschoolers scored higher on internalizing problems while American preschoolers scored higher on externalizing problems. Chinese preschool boys had significantly higher rates of externalizing problems than Chinese preschool girls. Cross-informant agreement between Chinese teachers and parents was relatively low compared to agreement in the original U.S. sample. Results support the generalizability of the taxonomic structure of preschool psychopathology derived in the U.S. to the Chinese, as well as the applicability of the Chinese version of the CBCL/1.5-5 and C-TRF.
vorige artikel The Role of Heavy Alcohol Use in the Developmental Process of Desistance in Dating Aggression during Adolescence
volgende artikel A Twin Study of ADHD Symptoms in Early Adolescence: Hyperactivity-impulsivity and Inattentiveness Show Substantial Genetic Overlap but Also Genetic Specificity 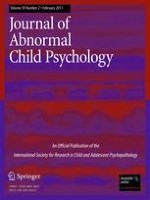 Transactional Associations Between Youths’ Responses to Peer Stress and Depression: The Moderating Roles of Sex and Stress Exposure

Cognitive Deficits and Positively Biased Self-Perceptions in Children with ADHD