Kidscreen-27 was developed as part of a cross-cultural European Union-funded project to standardise the measurement of children’s health-related quality of life. Yet, research has reported mixed evidence for the hypothesised 5-factor model, and no confirmatory factor analysis (CFA) has been conducted on the instrument with children of low socio-economic status (SES) across Ireland (Northern and Republic).

The data for this study were collected as part of a clustered randomised controlled trial. A total of 663 (347 male, 315 female) 8–9-year-old children (M = 8.74, SD = .50) of low SES took part. A 5- and modified 7-factor CFA models were specified using the maximum likelihood estimation. A nested Chi-square difference test was conducted to compare the fit of the models. Internal consistency and floor and ceiling effects were also examined.

Future research should apply the 7-factor model with children of low socio-economic status. Such efforts would help monitor the health status of the population. 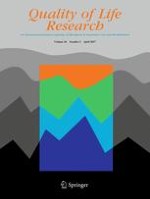 Testing whether patients with diabetes and healthy people perceive the meaning of the items in the Persian version of the SF-36 questionnaire similarly: a differential item functioning analysis

Quality of life in people aged 65+ in Europe: associated factors and models of social welfare—analysis of data from the SHARE project (Wave 5)