Although cognitive-behavioral therapy (CBT) techniques are well known for targeting psychological distresses, to date, no study has investigated their effectiveness in relieving death anxiety and ageism among nurses.

A parallel randomized controlled trial was conducted according to the CONSORT guidelines during October 2019 at the university hospital. A total of 110 nurses were selected through proportional stratified sampling and randomly assigned to the experimental and control groups. The intervention consisted of six two-hour training sessions delivered over five modules with the integration of different CBT exercises. The effect of CBT was assessed by measuring the differences in the students’ responses to a series of validated questionnaires of study variables pre-test (before the training sessions) and post-test (after the training sessions). Clinical registration was completed at ClinicalTrial.gov (ID: NCT04319393).

Overall, using CBT techniques led to significant improvements in the study outcomes. At postintervention, the nurses who had received CBT training had significantly better self-esteem and interpersonal relationships, a greater sense of symbolic immortality, and less death anxiety and ageism than the nurses in the control group.

CBT is an effective evidence-based psychological intervention for relieving nurses’ ageism towards older adults. The psychological well-being of nurses caring for older adults is crucial, and new techniques should be adopted to relieve nurses’ accumulated stress and decrease their death anxiety. Future studies which investigate the effectiveness of CBT on other forms of discrimination, such as racism and sexism in healthcare settings, are recommended.
vorige artikel Early Life Adversity as a Moderator of Symptom Change following Selective Serotonin Reuptake Inhibitors and Cognitive Behavioral Therapy
volgende artikel Which Variations of a Brief Cognitive Bias Modification Session for Interpretations Lead to the Strongest Effects? 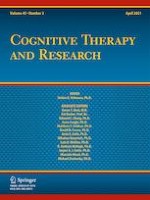 Which Variations of a Brief Cognitive Bias Modification Session for Interpretations Lead to the Strongest Effects?

“What Might Have Been…”: Counterfactual Thinking, Psychological Symptoms and Posttraumatic Growth When a Loved One is Missing

Mediators and Moderators of Homework–Outcome Relations in CBT for Depression: A Study of Engagement, Therapist Skill, and Client Factors