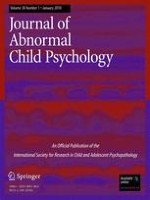 Rejection and Acceptance Across Contexts: Parents and Peers as Risks and Buffers for Early Adolescent Psychopathology. The TRAILS Study