To investigate the test–retest reliability of Investigating Choice Experiments Capability measure for Adults (ICECAP-A) in the adult Danish population.

The original English ICECAP-A was translated into Danish by forward–backwards translation using the guidelines by Beaton et al. Three hundred and-thirty-two participants with mean age of 57 years participated in a Web-based study. Data concerning relative and absolute agreement were analysed by the intra-class correlation coefficient and Bland–Altman plot with limits of agreement. The overall and item consistency was investigated by weighted kappa statistics from baseline to 2-week follow-up. Logistic regression was used to study the effect of the sociodemographic characteristics with inconsistent responses as the dependent binary variable. The independent variables were age, sex, education, income, and region of residence at baseline.

The baseline ICECAP-A preference-based index score was 0.84, and at follow-up, 0.83. The ICC was 0.86 (95% CI 0.826–0.884), and limits of agreement were 0.164 and − 0.151. The kappa coefficient ranges from 45 to 65%, between random and perfect agreement. The logistic regression to analyse inconsistent responses showed no significant association between the overall index score and sociodemographic characteristics, and no clear pattern was found concerning the individual item inconsistency.

Evidence regarding the reliability of the Danish version of ICECAP-A is satisfactory for both the index score agreement and the individual item consistency and is a reliable measure to be used in a Danish context and future health economic evaluations. 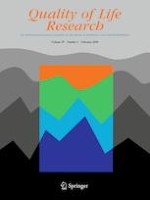 Health-related quality of life and depressive symptoms in Friedreich ataxia

Experiences of breast cancer in Arab countries. A thematic synthesis