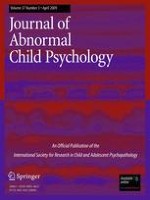 Developmental Pathways to Conduct Problems: A Further Test of the Childhood and Adolescent-Onset Distinction

Temperament and Risk for Depressive Symptoms in Adolescence: Mediation by Rumination and Moderation by Effortful Control

How Are Traits Related to Problem Behavior in Preschoolers? Similarities and Contrasts Between Temperament and Personality