This study examined the associations between internalizing and externalizing symptoms during early adolescence and the subsequent development of Major Depressive Disorder. The role that temperament plays in predisposing individuals to these particular pathways was also examined. Temperament at approximately age 12 was used to produce a risk-enriched subsample of 243 (124 female) participants. Data was collected in four waves over 6–7 years roughly corresponding to ages 13, 15, 17 and 19. Participants were excluded from the study, prior to the first wave, based on current or prior depressive, substance-use, or eating disorders. Logistic regression analyses revealed that internalizing symptoms and social-externalizing problems were significant risk pathways to the development of depression. Moreover, mediation analyses revealed that high temperamental negative emotionality, high affiliation, low effortful control, and low surgency were significant vulnerability factors for depression via the internalizing symptom pathway, whereas low effortful control was the only significant predictor for depression via the social-externalizing problem pathway. As such, high levels of effortful control acted as a protective factor for the development of depression across both symptom pathways, suggesting that is may be an important target for prevention strategies. 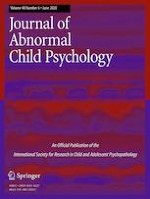 Co-Occurring Trajectories of Depression and Social Anxiety in Childhood and Adolescence: Interactive Effects of Positive Emotionality and Domains of Chronic Interpersonal Stress