Disruptive Mood Dysregulation Disorder (DMDD) is a new and controversial child psychiatric disorder characterized by persistent irritability and frequent temper loss. Among the controversies surrounding DMDD is whether the age of onset criterion—that DMDD may not be diagnosed before age 6 years—is justified. This study examined DMDD symptoms and associated patterns of psychiatric comorbidity, behavioral, and family functioning in a sample of 139 preschoolers (ages 4–0 to 5–11 years) admitted to an early childhood psychiatric day treatment program. DMDD symptoms were common in this acute clinical sample, with 63 children (45.3 %) presenting with frequent temper outbursts and chronic irritability. As compared to children who did not present with DMDD symptoms, these children demonstrated more aggression and emotional reactivity and lower receptive language skills, with high rates of comorbidity with the disruptive behavior disorders. Findings contribute to an emerging literature on preschool DMDD, with implications for early childhood psychiatric assessment and clinical interventions. 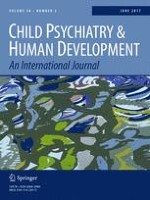 Effective Mental Health Screening in Adolescents: Should We Collect Data from Youth, Parents or Both?

Parenting Strategies to Deal with Children’s Anxiety: Do Parents Do What They Say They Do?