Previous research has shown that visual working memory (VWM) can be modulated by space-based or feature-based attentional selection. However, it remains unclear how the two modes of attention operate jointly to affect VWM, and in particular, if involuntary feature-based attention plays a role in VWM. In this study, a pre-cued change detection paradigm was employed to investigate the concurrent effects of space- and feature-based attention on VWM. Space-based attention was manipulated by informative spatial cueing and by varying the proximity between the test item and the cued (fixated) memory item, while feature-based attention was induced in an involuntary manner by having the test item to share the same color or shape with the cued item on a fraction of trials. The results showed that: (1) the memory performance for the cued items was always better than the uncued items, suggesting a beneficial effect of voluntary spatial attention; (2) with a brief duration of the memory array (250 ms), cue-test proximity benefited VWM in the shape judgment task but not in the color judgment task, whereas with a longer duration (1200 ms), no proximity effect was found for either task; (3) VWM was improved for the same-colored items regardless of the task and duration; (4) VWM was improved for the same-shaped items only in the shape judgment task with the longer duration of the memory array. A discrimination task further showed that the proximity effect associated with VWM reflects a perceptual bottleneck in memory encoding for shape but not for color with a brief display. Our results suggest that involuntary feature-based attention could be triggered by spatial cueing to modulate VWM; involuntary color-based attention facilitates VWM independently of task, whereas shape-based facilitation is task–dependent, i.e., confined only to the shape judgment task, presumably reflecting different attention-guiding potencies of the two features. 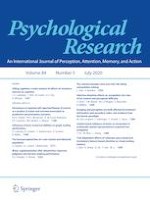