A 76-year-old female presented to the coronary care unit with chest pain and an ECG suggestive for an inferolateral myocardial infarction (Fig. 1). Her medical history consisted of hypertension, surgery to her back and macular degeneration. She had never smoked and had two brothers with coronary artery disease before the age of 60. This was the first time she had experienced chest pain. It started at the moment she was worrying about loss of eyesight due to macular degeneration.
×
A coronary angiogram was performed immediately and was normal. The left ventricular angiogram showed apical ballooning (Fig. 2). Echocardiography showed apical dyskinesia and no other abnormalities. These findings confirmed the diagnosis: takotsubo cardiomyopathy.
×
A beta blocker, ACE inhibitor and oral anticoagulation, to prevent apical thrombus formation, were started. In the following days the patient developed atrial fibrillation and she had recurrent chest and back pain. Analgesics were started. On the third day her blood pressure dropped and the diuresis decreased. Echocardiography revealed a pericardial effusion of up to 16 mm, with diastolic collapse of the right ventricle and >25 % transmitral flow variation with respiration which is indicative for cardiac tamponade (Fig. 3). CT angiography ruled out an aortic dissection. The oral anticoagulation was stopped and the INR of 2.6 was antagonised with vitamin K. Pericardiocentesis was performed. After draining 120 cc bloody fluid, there was an immediate improvement of the haemodynamics and diuresis.
×

Although takotsubo cardiomyopathy complicated by cardiac tamponade is very rare, echocardiography should be performed in case of haemodynamic deterioration to exclude pericardial effusion. The use of anticoagulation in these patients should be considered with care.

None declared.
Open Access This article is distributed under the terms of the Creative Commons Attribution License which permits any use, distribution, and reproduction in any medium, provided the original author(s) and the source are credited.
vorige artikel Unroofed coronary sinus newly diagnosed in adult patients after corrected congenital heart disease
volgende artikel Einthoven dissertation prizes 2013
insite
INHOUD
share
DELEN 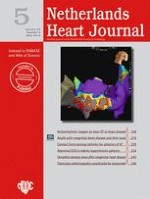