When exposed to a regular sequence, people learn to exploit its predictable structure. There have been two major ways of thinking about learning under these conditions: either as the acquisition of general statistical information about the transition probabilities displayed by the sequence or as a process of memorizing and using separate chunks that can later become progressively composed with extended practice. Even though chunk learning has been adopted by some theories of skill acquisition as their main building block, the evidence for chunk formation is scarce in some areas, and is especially so in the continuous serial reaction-time (SRT) task, which has become a major research tool in the study of implicit learning. This article presents a reappraisal, replication and extension of an experiment that stands so far as one of the few alleged demonstrations of chunk learning in the SRT task (Koch and Hoffmann, Psychological Res., 63:22–35, 2000). It shows that the effects which were taken as evidence for chunk learning can indeed be obtained before any systematic training and thus surely reflect a preexistent tendency rather than a learned outcome. Further analyses of the effects after extended practice confirm that this tendency remains essentially unchanged over continuous training unlike what could be expected from a chunk-based account of sequence learning.

Titel
Taking patterns for chunks: is there any evidence of chunk learning in continuous serial reaction-time tasks?
Auteur:
Luis Jiménez 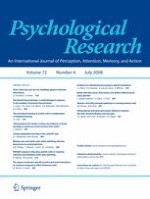 Better late than never: how onsets and offsets influence prior entry and exit

The Red Herring technique: a methodological response to the problem of demand characteristics

Absence of hardly pursued updating in a running memory task

Self produced and observed actions influence emotion: the roles of action fluency and eye gaze