This study examined the associations between symptoms of attention-deficit/hyperactivity disorder (ADHD) and social and school adjustment (academic performance, peer relationships, school social problems) and the moderating roles of children’s age and maternal parenting (affection and overprotection) in these associations. The sample consisted of 2,463 students who were in the first to ninth grade in northern Taiwan. Results from the linear mixed models demonstrated that ADHD symptoms were inversely associated with academic performance and positively associated with social adjustment problems. Further, children’s age and maternal parenting moderated the associations between ADHD symptoms and school and social adjustment. For example, maternal overprotection moderated the relation between hyperactivity and negative peer relationships (i.e., difficulty forming and maintaining friendships), such that this relation was stronger for children who experienced higher levels of overprotection than children who did not. Moreover, children’s age moderated the association between attention problems and decreased academic performance, such that this association was stronger for older children and adolescents than for younger children. Furthermore, children’s age and maternal affection interacted to influence the association between attention problems and school social problems (i.e., bullying, aggression, and peer rejection) with maternal affection acting as a buffer for older children (grades 4–6) only. These findings are discussed from a developmental psychopathology perspective. 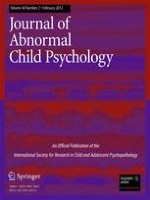 Elevated Appraisals of the Negative Impact of Naturally Occurring Life Events: A Risk Factor for Depressive and Anxiety Disorders

Erratum to: Effects of the KiVa Anti-bullying Program on Adolescents’Depression, Anxiety, and Perception of Peers