Rheumatic mitral stenosis continues to be prevalent in developing countries, notably in endemic areas. Over the last few decades, percutaneous balloon mitral valvuloplasty (PBMV) has been established as a lower-cost alternative treatment for mitral stenosis (MS) in low-to-middle-income countries. PBMV has also been suggested to be an effective and safe alternative treatment modality. This study aims to analyse the survival of rheumatic MS patients treated with PBMV compared with those treated with mitral valve surgery (MVS).

This study was a national, single-centre, longitudinal study using a survival analysis method in 329 consecutive patients suffering from rheumatic heart disease with severe MS who underwent PBMV compared with 142 consecutive patients with similar characteristics who underwent MVS between January 2011 and December 2016. Survival analysis and event-free duration were determined over a median follow-up of 24 months in the PBMV group and 27 months in the MVS group.

In this study, the efficacy and safety of PBMV was reconfirmed, as PBMV proved to be non-inferior to MVS in survival prognosis, but sustained event-free duration was significantly better in the MVS group than in the PBMV group.

Titel
Survival analysis of patients with rheumatic MS after PBMV compared with MVS in a low-to-middle-income country
Auteurs:
A. M. Ambari
B. Setianto
A. Santoso
B. Dwiputra
B. Radi
A. A. Alkatiri
A. B. Adji
E. Susilowati
F. Tulrahmi
M. J. M. Cramer
P. A. Doevendans 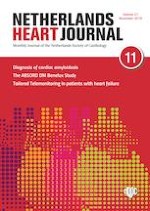 Absorbing the Absorb experience—don’t let the concept fade away

Percutaneous balloon mitral valvuloplasty: is there still a place for it in the Netherlands?