» Naar de samenvatting
Belangrijke opmerkingen
The abstract of this manuscript was presented at the NVVC-NVT Najaarscongres (The Netherlands Society of Cardiology-Dutch Association for Thoracic Surgery Fall Conference), Congrescentrum Papendal, Arnhem, November 1st and 2nd, 2018. It won first prize in its group.
S.I. Croon and A. Angkasuwan contributed equally to the manuscript.
What is new?
Despite the high morbidity and mortality of aortic valve endocarditis complicated by periannular abscess formation, reconstruction of the annulus with a gentamycin-pericardial patch and valve replacement is a successful treatment. In comparison with earlier reports of the literature, this treatment has a comparable outcome to root replacement therapy.

Active infective endocarditis is a life-threatening condition that commonly affects the heart valves and requires urgent medical care. Appropriate antibiotic therapy is crucial, although surgical intervention is needed in approximately one-third of the cases [ 1]. Early surgery is recommended for improving short-term as well as long-term survival [ 2, 3]. Up to 42% of infective endocarditis cases is complicated by periannular spreading of the infection and abscess formation, with a relatively higher occurrence in prosthetic valve endocarditis (PVE) compared with native valve endocarditis (NVE) [ 4, 5]. While rare, aortic periannular and paravalvular abscess formation are associated with a more aggressive course of the disease, which in turn may lead to life-threatening complications such as sepsis and perforation [ 6]. Delay of surgery might lead to further destruction of the aortic root, a higher risk of complications, and a more complex surgical procedure. The associated morbidity and mortality rate remains high despite therapeutic advances, indicating the need for more effective interventions [ 6]. Generally, the primary goal of surgery in these cases is radical debridement of the infected tissue, reconstruction of the excised area, and replacement of the aortic valve or root [ 7]. The choice of annular reconstruction with aortic valve replacement or aortic root replacement depends on the extent of the annular destruction. While aortic root replacement was the primary choice in multiple recent studies [ 8, 9], we solely used annular reconstruction and aortic valve replacement in our centre as there is an increased risk of valve deterioration with aortic root replacement [ 10]. In this study, we sought to review our database since 1998 to investigate the incidence and long-term outcome of patients with endocarditis complicated by periannular abscess, who are treated with annular reconstruction and aortic valve replacement.

In the Catharina Hospital in Eindhoven, the Netherlands, 525 patients underwent surgery for infective endocarditis between 1998 and 2017. Sixty-nine patients (13%) who suffered from infective endocarditis of the aortic valve complicated by aortic periannular abscess formation were identified from the Catharina Hospital Eindhoven cardiac surgery database for a retrospective study. To obtain any missing data, we consulted other sources including hospital medical records and operation room reports. The included patients required patch reconstruction and were treated with gentamicin sponges. The local medical ethics committee approved the study and waived the need for an informed consent.

The procedures involved the usual type of myocardial protection and cardiopulmonary bypass techniques [ 11], hence not further specified in this report. After sufficient exposure of the infected area, extensive debridement was performed, including sutures and pledgets in case of prosthetic valve endocarditis. Reconstruction of the aortic root, annulus and other affected areas was then undertaken primarily by using bovine pericardium. Part of the reconstruction is managing the abscess cavities after thorough cleaning. The technique employed in this setting is filling the abscess cavities completely with gentamicin-treated sponges such as Gentafleece (Baxter, Deerfield, IL, USA) or Garacol (EUSA pharma, EU) and closure of the cavity with bovine pericardial patch. If the abscess cavity has eroded the aortic annulus, prosthetics in the aortic position are attached—partly—to the reconstructed area. The aortotomy is then closed.

Follow-up data were acquired by reviewing patient files in digital and hard-copy format and on film. For patients who were referred for surgery by other hospitals and afterwards returned to these hospitals, we collected data by contacting the referring cardiologists. Patients were approached directly in case of lost to follow-up. They were first asked for their consent before answering the questionnaire. Date of follow-up was July 1st, 2018. Follow-up was complete for all patients. The median follow-up was 3.58 (interquartile range from 1.13 to 9.58) years, ranging from 0 to 20 years.

Overall mortality:
defined as all-cause mortality occurring during the follow-up period. It was retrieved through consulting the municipal personal records databases.
Re-intervention:
defined as reoperation because of recurrent infective endocarditis.

Antibiotic treatment of patients with endocarditis usually starts before the culture and susceptibility pattern of the offending microorganism are known. The empirical treatment is focused on the most likely pathogens. Subsequently, when the microbiological data is known, the antibiotics and the duration of treatment are adapted depending on the tissue and blood culture results. The duration of treatments is most commonly six weeks, unless the microbiologist advises another policy. The antibiotic policy is reconsidered when the patient shows no improvement after three days.

Data about the causative microorganism was available for all but six patients (Tab.  3). Four of these patients had a negative blood or tissue culture, and the medical records of two patients were incomplete in this respect. The most common cultivated organisms were Staphylococci species (28%), Streptococci species (28%) and Propionibacterium species (14%). No significant effect of the offending microorganisms on survival time could be found for these three groups. However, in the remaining group of patients, a significant association was found between the offending microorganism and survival: ( χ 2(1) = 8.105, p = 0.004). This latter group consisted of eleven patients infected with eight different types of bacteria. Within this group, there were three cases of Enterococcus faecalis and two cases with different Pseudomonas species. All other patients were infected by different bacteria.
Table 3
Microorganisms overview

Due to heart block, 23 patients required implantation of a permanent pacemaker; one patient received palliative care, hence a pacemaker was contraindicated. Five patients (7%) had a stroke (CVA), whereas nineteen patients (28%) had pulmonary complications (Tab.  4). Ten patients (15%) required a re-exploration for bleeding. During the follow-up, eight patients (12%) suffered from reinfection, seven of which affected the aortic valve and one the mitral valve. Seven of these patients underwent re-intervention, whereas one passed away before re-intervention was performed. Three of the patients who underwent re-intervention died within 30 days of surgery. Freedom from recurrent endocarditis was 83.5 ± 13.3% at 10 years.
Table 4
Postoperative complications & long-term outcome
Table 5
Comparison of studies concerning management and outcomes of aortic valve endocarditis complicated by periannular abscess
Ao aorta, ARR aortic root replacement, IE infective endocarditis, LV left ventricle, NVE native valve endocarditis, PVE prosthetic valve endocarditis
a Multicentre study

None declared. (No external funding for this study was used. The Catharina Hospital was involved in all phases of the study, and covered all costs associated with the development and the publishing of the manuscript.)

S.I. Croon, A. Angkasuwan, A.H. van Straten, A. Khamooshian, T.W. Elenbaas and M.A. Soliman-Hamad declare that they have no competing interests.
Open Access This article is licensed under a Creative Commons Attribution 4.0 International License, which permits use, sharing, adaptation, distribution and reproduction in any medium or format, as long as you give appropriate credit to the original author(s) and the source, provide a link to the Creative Commons licence, and indicate if changes were made. The images or other third party material in this article are included in the article’s Creative Commons licence, unless indicated otherwise in a credit line to the material. If material is not included in the article’s Creative Commons licence and your intended use is not permitted by statutory regulation or exceeds the permitted use, you will need to obtain permission directly from the copyright holder. To view a copy of this licence, visit http://​creativecommons.​org/​licenses/​by/​4.​0/​. 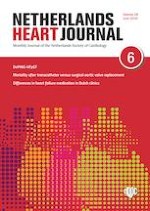 TrimetaziDine as a Performance-enhancING drug in heart failure with preserved ejection fraction (DoPING-HFpEF): rationale and design of a placebo-controlled cross-over intervention study