Negativity in parent–child relationships during adolescence has been viewed as a risk factor for teens’ future personal and interpersonal adjustment. This study examined support from romantic partners and close friends during late adolescence as protective against maternal negativity experienced during early adolescence. A combination of observational, self-report, and peer-report measures were obtained from a community sample of 97 youth (58 % female), their mothers, closest friends, and romantic partners assessed at ages 13, 18, and 20. Moderating effects suggested a protective effect of romantic support against maternal negativity across a variety of psychosocial outcomes, including depressive symptoms, self-worth, social withdrawal, and externalizing behavior. Protective effects were found even after controlling for initial levels of outcome behavior and observed support from close friends throughout adolescence. Receiving support from a romantic partner may provide teens with new, positive ways of coping with adversity and help them avoid more serious distress that may be predicted from maternal negativity when such support is not available.
vorige artikel Youth–Adult Partnerships and Youth Identity Style
volgende artikel Katherine Zoepf: Excellent Daughters: The Secret Lives of Young Women who are Transforming the Arab World 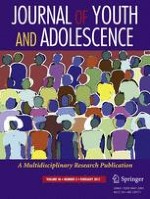 The Impact of Degree of Exposure to Violent Video Games, Family Background, and Other Factors on Youth Violence

The Dark Side of Internet Use: Two Longitudinal Studies of Excessive Internet Use, Depressive Symptoms, School Burnout and Engagement Among Finnish Early and Late Adolescents