Suicide rates have increased over the past decade, and screen media (and social media in particular) are often blamed for this marked increase. However, there is little longitudinal research on this topic. The current study examined the link between various types of screen media use over a 10-year period (from adolescence to emerging adulthood) to suicide risk in emerging adulthood. Participants included 500 adolescents (51% female) who were first surveyed in 2009, when they were an average of 13.82 years old (range 12-15 years). For girls, a high level of social media or television use in early adolescence followed by a marked increase over time was most predictive of suicide risk in emerging adulthood. Additionally, video game use that increased over time was also associated with a higher risk for developing suicide risk for girls. A passive sensing measurement was also included at the final wave of data collection to obtain a more accurate and complete picture of phone use in particular. The use of entertainment apps was risky for girls while reading apps were risky for boys. Additionally, video game use (for boys) was associated with suicide risk when cyberbullying was also high. Identifying nonnormative patterns of media during adolescence may be instructive in terms of suicide prevention efforts.
vorige artikel Face-to-Face and Cyber-Victimization: A Longitudinal Study of Offline Appearance Anxiety and Online Appearance Preoccupation
volgende artikel The Development of Post-traumatic Stress Symptoms among Adolescents Who Experience Cyber and Traditional Victimization over Time 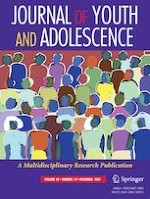 Perceptions of Parenting in Daily Life: Adolescent-Parent Differences and Associations with Adolescent Affect