Suicide is one of the leading causes of death in many Western countries. An exploration of factors associated with suicidality may help to understand the mechanisms that lead to suicide. Two samples in Germany (n = 500 and n = 477) were examined via Internet regarding suicidality, depression, alcohol abuse, adverse childhood experiences, and parent–child relationships. A Graphical Markov Model was constructed from the first subsample, testing for main, quadratic and interaction effects. All effects in the model were cross-validated using the second subsample. Depression was found to be a strong predictor of suicidality; alcohol abuse was not a predictor. Both maternal and paternal love also predicted suicidality; the former had an indirect effect via depression and the latter a direct effect. Early experiences with violence showed both a direct and indirect association with suicidality. In addition to depression being a predictor for suicidality, various pathways connect suicidality with early childhood experiences.
volgende artikel Social Adjustment Among Taiwanese Children with Symptoms of ADHD, ODD, and ADHD Comorbid with ODD 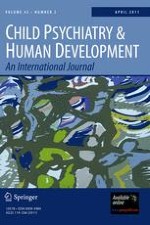 Development and Preliminary Psychometric Evaluation of the Children’s Saving Inventory

Social Adjustment Among Taiwanese Children with Symptoms of ADHD, ODD, and ADHD Comorbid with ODD

Empathy and Bullying: Exploring the Influence of Callous-Unemotional Traits

Exploring the Impact of Chronic Tic Disorders on Youth: Results from the Tourette Syndrome Impact Survey