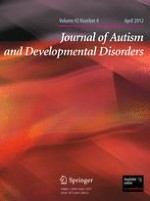 Relationship Status Among Parents of Children with Autism Spectrum Disorders: A Population-Based Study