This study compared the subjective quality of life (SQOL) in schizophrenia patients living with their families in Hong Kong (HK) and Beijing (BJ) and explored the relationship between SQOL and basic socio-demographic and clinical factors.

Two hundred and sixty-four clinically stable outpatients with schizophrenia were randomly selected in HK and 258 counterparts matched according to age, sex, age at onset, and length of illness in BJ. SQOL and psychiatric status were assessed with standard rating instruments.

Despite considerable differences between the two sites in terms of health care delivery and the economic conditions of the subjects, SQOL did not differ between HK and BJ. The conclusion is in line with previous studies that suggested that patients’ SQOL was independent of their living standard as long as it reached a certain minimum level. SQOL was more strongly related to the severity of depressive symptoms and had weak association with socio-demographic factors. 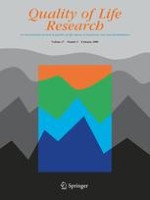 Four weeks of daily assessments of anxiety, depression and activity compared to a point assessment with the Hospital Anxiety and Depression Scale

Quality of life and its correlates in octogenarians. Use of the SEIQoL-DW in Wave 5 of the Aberdeen Birth Cohort 1921 Study (ABC1921)