Efforts to parse ADHD’s heterogeneity in the DSM system has generally relied on subtypes, or presentations, based on different symptom combinations. Promising recent work has suggested that biologically-relevant and clinically predictive subgroups may be identified via an alternative feature set based on either a) temperament traits or b) executive function measures. Yet, the potential additive ability of these domains for specifying ADHD sub-phenotypes remains unknown. We thus sought to determine whether temperament traits and executive function, together, could facilitate a more nuanced and clinically meaningful subgrouping of children with ADHD. Participants included 828 children aged 7–11 years (62% with ADHD, 38% female). Latent profile and community detection analyses using both temperament and cognitive input features provided support for a primarily temperament-based three-subgroup solution (i.e., “Mild,” “Irritable,” and “Surgent”), although the distinction between Surgent and Mild subgroups may have been better explained as an ADHD symptom severity effect. There was also evidence of a five-subgroup solution, in which cognitive measures differentiated the Surgent subgroup into those with and without cognitive impairment. Cognitive measures also appeared to differentiate the Irritable subgroup based on severity, although differences in resulting subgroups appeared better explained via differences in negative affect and shyness. Subgroups within the five-subgroup solution meaningfully differed with respect to concurrent comorbidity. The utility of the five-subgroup solution for predicting comorbid diagnoses 2 years later was more limited. Additional work is needed to fully characterize the integration of cognitive and affective functioning in ADHD and their overlapping or additive value for clinical prediction.
volgende artikel Heterogeneous Trajectories of Problematic Alcohol Use, Depressive Symptoms, and their Co-Occurrence in Young Adults with and without Childhood ADHD 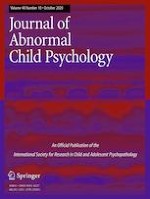 Thinking about Others’ Minds: Mental State Inference in Boys with Conduct Problems and Callous-Unemotional Traits