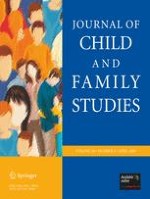 Coping with Family Conflict: What’s Helpful and What’s Not for Low-income Adolescents

The Role of Parental Stress, Mother’s Childhood Abuse and Perceived Consequences of Violence in Predicting Attitudes and Attribution in Favor of Corporal Punishment

Mothers’ and Fathers’ Reluctance to Seek Psychological Help for Their Children

The Relationship Between Adolescents’ Attitudes Toward Their Fathers and Loneliness: A Cross-Cultural Study