» Toegang tot de volledige tekst krijgen
Belangrijke opmerkingen
This work was supported by National Institutes of Health Grants MH43899, MH16880, HD10333, DA11015, DA13956, AA015336, and HD50346. Earlier versions of this paper were presented at the meeting of the Behavior Genetics Association on July 2, 2005 in Los Angeles, CA and the meeting of the World Congress of Psychiatric Genetics on October 17, 2005 in Boston, MA. We thank the participants who contributed their time to this project and the research assistants at the Institute for Behavioral Genetics for careful work in data collection, coding, and management. 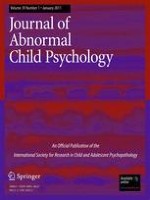