The strongest proximal predictors of depression onset in adolescence are stressful life events (SLEs). Changes in the hypothalamic-pituitary-adrenal (HPA) axis response to stress are theorized to mediate the etiological effect of SLEs on depression onset. The goal of the current study was to examine differences in the cortisol response to a laboratory-induced stressor between youth with versus without at least one SLE in the etiologically-central 3-month period prior to depression onset. One hundred adolescents (24 first-onset depression, 18 recurrent depression, and 58 non-depressed controls) had five salivary cortisol samples collected over the course of the Trier Social Stress Test (TSST). SLEs were assessed using a rigorous contextual interview and rating system. Among those with an SLE, youth on their first onset of depression had a flatter cortisol reactivity slope relative to non-depressed adolescents, and youth on a recurrent episode of depression had a steeper recovery slope relative to first-onsets and non-depressed adolescents. In contrast, no between-group differences were found among those with no SLE prior to onset. These results suggest that differences in the HPA axis response pattern may represent a neurobiological mechanism that distinguishes depressed and non-depressed groups but only for adolescents whose depression is precipitated by SLEs. Further, this neurobiological mechanism may play a different role in the very first episode of depression than it does in recurrent episodes.
vorige artikel Age and Social Context Modulate the Effect of Anxiety on Risk-taking in Pediatric Samples
volgende artikel Cognitive Control Deficits in Shifting and Inhibition in Preschool Age Children are Associated with Increased Depression and Anxiety Over 7.5 Years of Development 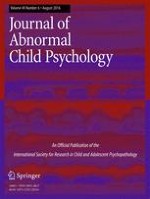 Cognitive Control Deficits in Shifting and Inhibition in Preschool Age Children are Associated with Increased Depression and Anxiety Over 7.5 Years of Development