In 2011 the Netherlands Heart Foundation allocated funding (CVON, Cardiovasculair Onderzoek Nederland) to stimulate collaboration between clinical and preclinical researchers on specific areas of research. One of those areas involves genetic heart diseases, which are frequently caused by pathogenic variants in genes that encode sarcomere proteins. In 2014, the DOSIS (Determinants of susceptibility in inherited cardiomyopathy: towards novel therapeutic approaches) consortium was initiated, focusing their research on secondary disease hits involved in the onset and progression of cardiomyopathies. Here we highlight several recent observations from our consortium and collaborators which may ultimately be relevant for clinical practice. 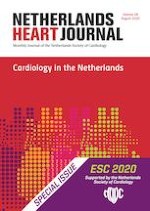 Young@Heart: empowering the next generation of cardiovascular researchers

Defibrillation testing during implantation of the subcutaneous implantable cardioverter-defibrillator: a necessary standard or becoming redundant?

ESC Congress 2020—Cardiology in the Netherlands