DSM-5 Disruptive Mood Dysregulation Disorder (DMDD) is a controversial new diagnosis. The DSM-5 conceptualizes DMDD as persistent and chronic, but the stability of the two DMDD symptoms (irritable-angry mood and temper outbursts) over time is not known. Mothers rated DMDD symptoms in a population-based sample of 376 children (54 % male) evaluated at 6–12 years (M 9) and again an average of 8 years later (M 16). Mean scores on irritable-angry mood plus temper outbursts at baseline and follow-up were below sometimes a problem, but were higher at baseline than follow-up. Irritable-angry mood and temper outbursts were both often or very often a problem for 9 % of children at baseline, 6 % at follow-up, and 3 % at baseline and follow-up. Only 29 % of children whose baseline symptoms were often or very often continued to have follow-up symptoms at this level (remission rate 71 %). Less than half (45 %) of the children whose symptoms were often or very often at follow-up had these symptoms 8 years earlier (55 % new cases). Our finding of 71 % remission and 55 % new cases indicates instability of DMDD symptoms over an 8-year period. However, the finding that 29 % still had symptoms often or very often 8 years later is clinically significant. DMDD symptoms were found in only one child who did not have symptoms of oppositional defiant disorder (ODD), conduct disorder, ADHD, anxiety, or depression. This suggests that DMDD symptoms are a feature of multiple disorders, particularly ODD, and do not occur in isolation, questioning the validity of DMDD as a unique and independent diagnosis.
vorige artikel Callous-Unemotional Traits Trajectories Interact with Earlier Conduct Problems and Executive Control to Predict Violence and Substance Use Among High Risk Male Adolescents
volgende artikel Executive Function in Low Birth Weight Preschoolers: The Moderating Effect of Parenting 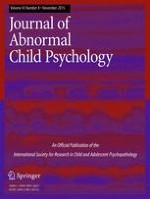