‘Calling’ to a vocation and its connections to career development and wellbeing is a growing area of scholarly inquiry. Reviewing dozens of prior definitions, Dik and Duffy [ 1] defined a calling as a career that (a) involves an external summons, (b) provides a sense of meaning or purpose, and (c) is used to help others in some capacity. With samples of working adults and college students, viewing one’s career in such a fashion has been linked to positive work and wellbeing outcomes, including increased career maturity, academic satisfaction, job satisfaction, career commitment, life meaning, and life satisfaction [ 2– 5].
Given that research on calling is emerging, no studies to date have compared individuals in one profession with another regarding endorsement of a calling. Although calling is a term frequently used colloquially within the field of medicine, only two studies to date have examined the construct with physicians or medical students. Duffy et al. [ 6] surveyed a group of medical students prior to the start of their first and third years, and found that over time feeling called was correlated with increased life meaning and career maturity. Bott et al. [ 7] interviewed physicians in academic medicine who felt their career was a calling and found that these individuals were highly satisfied with their work and life, and many felt called to multiple components of their job, including research, teaching, and practice.
The paucity of research on calling in the field of medicine leaves a great deal of questions to be investigated. The purpose of the current study is twofold. First, we sought to answer the question of whether medical students endorse the presence of a calling or a search for a calling when they first begin medical school and, second, we explored whether medical students who endorse an interest in primary care versus non-primary care specialities when they first begin medical school differ regarding having the presence of, or search for, a career calling.

With institutional review board approval, 574 first-year medical students (84 % response rate) at one United States medical school were administered the Brief Calling Survey (BCS) [ 8] when they started medical school in 2008 ( n = 111), 2009 ( n = 148), 2011 ( n = 172), and 2012 ( n = 143). (The BCS was not administered in 2010 because of scheduling difficulties with survey administration). The BCS has been used in several studies previously with findings to support its reliability and correlations with career maturity. This 4-item survey uses a Likert-type response scale: Not at all true of me (1); Mildly true of me (2); Moderately true of me (3); Mostly true of me (4); Totally true of me (5). The four items are as follows: ‘I have a calling to a particular kind of work’, ‘I have a good understanding of my calling as it applies to my career’, ‘I am trying to figure out my calling in my career’, and ‘I am searching for my calling as it applies to my career’. Scholars have pointed out that perceiving a calling and searching for a calling are not mutually exclusive, as people could have a calling in one area but be searching for a different calling, or could be searching for more than one calling [ 1]. This distinction is evident in data for the current study, as the two presence items only correlated between 0.05 and 0.16 with the two search items, indicating these are distinct constructs. These students also indicated their speciality interest. For purposes of data analysis, specialities were coded as primary versus non-primary care.

The results from this study shed important light on the construct of calling within first-year medical students. Generally, first-year medical students endorsed having a calling, and were more likely to endorse having a calling than searching for one. These results suggest that calling is a salient construct with regard to how first-year medical students view their career. Additionally, at this point in their career development, students may feel strongly that medicine is the career they are called to, and thus are less likely to be searching for a calling. Students embarking on a career in medicine who are interested in primary care also expressed a stronger presence of a calling compared with students interested in non-primary care specialities. Given that a core component of calling is prosocial career motivation, or more simply a motivation to help others through one’s work, primary care specialities may offer more ample opportunities to directly help others. As such, students interested in primary care specialities may be more likely to think of their career as a calling.

The authors report no declarations of interest. 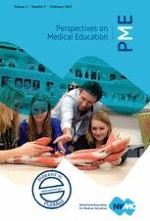 Barriers to the use of evidence-based medicine: knowledge and skills, attitude, and external factors

Best abstracts of the NVMO conference