The aim was to describe levels of health-related quality of life (HRQoL) and its determinants in patients with solitary pulmonary nodule (SPN) and to compare them with the French general population.

A prospective multicentre study of patients diagnosed with SPN, in northeastern regions of France, was carried out between 2002 and 2005. Six months after the end of diagnostic procedure, patients completed the SF-36 self-reported questionnaire (where 100 indicates high HRQoL). For a comparison, HRQoL data from a sample of the French general population collected by INSEE in 2002–2003 (n = 17,750).

Among 171 participating patients, 39 had malignant nodules and had lesser mean scores on physical and emotional role, vitality and social functioning (−6 to −18 points) than those with nonmalignant nodule. Compared to the French general population, patients with SPN had lower scores, by 11–30 points, in all dimensions (P < 0.001). Older age and smoking history were associated with low HRQoL.

Six months after receiving a diagnosis of SPNs, whether malignant, patients have worse HRQoL compared to the French general population. It indicates areas where physicians can help patients coping with their disease. 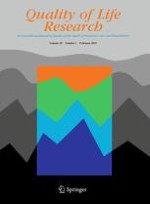