The association between family socioeconomic status (SES) and the suspected autism spectrum disorder (ASD) status of 18-month-old toddlers was investigated using a population-based sample in Japan, which has a universal healthcare system and a mandatory health checkup system for toddlers. Questionnaires including SES measurements and modified checklist for autism in toddlers were mailed to all families with 18-month-old toddlers in Chiba, a city near Tokyo (N = 6,061; response rate: 64 %). The results of logistic regression analysis (which were adjusted for potential confounders) indicated that low maternal education, but not paternal education or family income, were associated with having suspected ASD offspring. Lower maternal education was associated with an increased risk of autistic traits in Japan.
vorige artikel Reading Comprehension Interventions for Students with Autism Spectrum Disorders: A Synthesis of Research
volgende artikel Using the Circumplex Model of Affect to Study Valence and Arousal Ratings of Emotional Faces by Children and Adults with Autism Spectrum Disorders 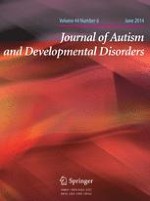 Response from Authors to Comments on “An Intervention for Sensory Difficulties in Children with Autism: A Randomized Trial”

Impacts of Autistic Behaviors, Emotional and Behavioral Problems on Parenting Stress in Caregivers of Children with Autism