The aims of the present study are to provide population estimates for the prevalence of mindfulness use in the United States and to identify which groups are more likely to self-report mindfulness use.

Using data from the 2017 National Health Interview Survey (NHIS), the current study analyzed 26,742 responses from adults in the United States and estimated patterns in the likelihood of self-reported mindfulness use across groups using logistic regression models.

The results of the present study suggest an unequal distribution of mindfulness use across groups in the United States. 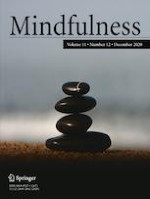 Association Between Sleep Disturbances and Suicide Risk Among Firefighters: the Moderating Role of Mindfulness

A Meta-analysis of Mindfulness-Based Interventions in Adults with Attention-Deficit Hyperactivity Disorder: Impact on ADHD Symptoms, Depression, and Executive Functioning