Social status is a salient feature of the classroom peer ecology in early adolescence, yet research has not examined how it plays out within the domains of math and science. The current study investigated the behavioral profiles of cool and admired youth (n = 739, 51% female) in 5th and 6th grade math and science classes. “Cool” youth were perceived by peers as academically oriented, prosocial, and not disruptive. When grade level differences were found, they tended to favor 5th graders, such that cool youth had even more positive profiles in 5th grade compared to 6th grade. Admiration was associated with a more adaptive pattern of behaviors than coolness, and grade level differences were less pronounced. Cross-lagged models revealed some reciprocal relationships between behavior and social status. Implications for teachers are discussed, namely that attention to social status dynamics is important for creating a positive social climate that supports early adolescent engagement in math and science classes. 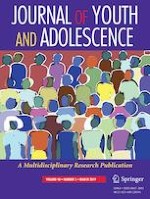 Parental Knowledge Discrepancies: Examining the Roles of Warmth and Self-Disclosure

Internalizing Symptoms and Externalizing Problems: Risk Factors for or Consequences of Cyber Victimization?

The Effects of Youth Mentoring Programs: A Meta-analysis of Outcome Studies