Social Networks and Friendships at School: Comparing Children With and Without ASD | mijn-bsl Skip to main content
ZOEKEN MENU 1 2 3 4

A total of 243 children were prescreened for participation in this study and 83 families signed consent from August 2003 to September 2007. The majority of families who did not meet the prescreening criteria lived outside of our catchment area (within 90 min of the University). Children were included in this study if they had a diagnosis of ASD from a licensed psychologist, if they met criteria for ASD on the ADI-R and ADOS, were fully included in a regular education classroom for at least 80% of the school day, were between the ages of 6–11 years old and in grades 1–5, and had an IQ of 65 or higher. Children were excluded from this study if they had additional diagnoses. Of the 83 children with ASD who signed consent, 23 did not participate for a variety of reasons (nine schools refused participation; six parents withdrew before the assessments; six children did not meet the IQ criteria; two children did not meet criteria for ASD). All peers from each participating child with ASD’s classroom were then invited to participate in the study. Both parental consent and child assent were obtained from all participating peers.
A total of 60 children with ASD and 815 typically developing children participated in this study. Research clinicians not associated with the study independently evaluated all children with ASD. Overall, 44 children received an autism diagnosis, and 16 children received an Asperger diagnosis. Participants were recruited from 56 classrooms in 30 different schools across the greater Los Angeles area (53% of the schools were Title I schools). Of the children with ASD, 15 children were in first grade, 18 children in second grade, eight children in third grade, 11 children in fourth grade, and eight children in fifth grade. Children with ASD were from diverse ethnic backgrounds (46.7% Caucasian, 5% African American, 21.7% Latino, 16.7% Asian, and 10% Other) and were predominantly male (90%). All were fully included in regular education classrooms for 80% or more of the school day and were an average of 8.14 ± 1.56 years old, with an average IQ of 90.97 ± 16.33. One family refused the IQ test but previous reports of IQ were in the normal range. Sixty percent of the children with ASD were assigned a 1:1 aide in the classroom and on the playground. Children assigned an aide had significantly lower IQs than children without an aide, t(1, 57) = 3.07, p = .003. Average IQ of children with NO AIDE (N = 24) was 98.33 (SD = 19.23) and of children WITH AIDE (N = 35) was 85.91 (SD = 11.86).
To allow for direct comparisons to the children with ASD, a subsample of typical children was randomly selected from each child’s classroom that matched the children with ASD on gender, age, grade and classroom. Typically developing children were an average of 7.86 ± 1.43 years old. Further demographic data were not available for the matched peers.

Once families completed the informed consent process, they were assessed by independent evaluators to validate the clinical diagnosis of ASD via the ADI-R (Lord et al. 1994) and ADOS (Lord et al. 2000) evaluations. Independent evaluators also administered the Wechsler Intelligence Scale for Children (WISC-III; Weschler 1991) to obtain a developmental quotient. Children with an IQ of 65 or higher and who had a diagnosis of ASD were included in the study.
Upon entry into the study, research personnel contacted the target child’s school and obtained a letter of school participation for the study. Once school approval was obtained, consent forms were distributed to all children in the class. Children were informed that their classroom was selected to participate in a research study examining children’s friendships and social skills. Children, who returned informed consent from their parents, as well as offered assent to join the study, completed the social network measures (including brief demographic information) and the Friendship Qualities Scale. To ensure understanding of the measures, research personnel provided verbal instructions on how to complete the instruments and individually assisted children who had difficulty reading and/or writing and/or were in the youngest grades. Children in the older grades independently completed the measures after instructions were given. In addition, teachers were asked to complete the Teacher Perceptions Scale for the child with ASD during this visit. Within the same week of distributing classroom measures, research personnel gathered behavioral observations on the playground during two separate recess periods.

Analyses below are based on 120 children, 60 children with ASD and a paired sample of 60 typically developing peers (children matched on age and gender from the same classroom). There were no differences on outcome measures between children diagnosed with Asperger syndrome (n = 16) and autism (n = 44); therefore, the following analyses included all 60 children with ASD. We first report descriptive data for the groups on measures of peer nomination and friendship ratings: social network centrality, friendship nominations (indegrees, outdegrees, connections, rejects, reciprocity of best and top 3 friends), and friendship quality ratings. In each case, we tested for group and grade-related differences. Next we report the descriptive data for the playground observations of children with ASD, and finally report individual differences in measures for the children with ASD.

Descriptive Data: Self-and Other Perceptions of Social Connections for Children With and Without ASD

Within the Autism Group Analyses: Playground Observations of Children with ASD

Connections Between Playground Observations, Peer, Self and Teacher Reports for Children with ASD

This study was supported by NIMH grant 5-U54-MH-068172 and HRSA grant UA3MC11055. We thank the children, parents, schools and teachers who participated, and the individuals who contributed countless hours of assessments, intervention, and coding, Laudan Jahromi, Lisa Lee, Eric Ishijima, Kelly Goods, Nancy Huynh, Mark Kretzmann, Tracy Guiou and Steve Johnson. We especially appreciate the statistical support of Jeff Wood and Fiona Whalen from the UCLA Semel Institute Statistical Group and to Steven Kapp for feedback on earlier versions of the paper. 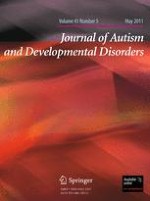 Is It a Bird? Is It a Plane? Category Use in Problem-solving in Children with Autism Spectrum Disorders

Mothers of Children with Developmental Disorders in the Bedouin Community in Israel: Family Functioning, Caregiver Burden, and Coping Abilities