The aim of this study was to investigate symptoms of social anxiety and the psychometric properties of the Social Anxiety Scale for Adolescents (SAS-A) among Finnish adolescents, 13–16 years of age. Study 1 (n = 867) examined the distribution of SAS-A scores according to gender and age, and the internal consistency and factor structure of the SAS-A. In a subsample (n = 563; Study 2) concurrent and discriminant validity of the SAS-A were examined relative to the Social Phobia Inventory and the Beck Depression Inventory. Test–retest stability was examined over a 30-month period by repeated measures every 6 months in another subsample (n = 377; Study 3). Results mostly revealed no gender differences in social anxiety, except that boys reported more general social avoidance and distress than girls. Older adolescents (14–16-year-olds) reported higher social anxiety than younger adolescents (12–13-year-olds). Internal consistency for the SAS-A was acceptable for both genders and for all three SAS-A subscales. Confirmatory factor analysis replicated the original 18-item three-factor structure of the SAS-A, accounting for 61% of the variance between items. Evidence for concurrent and discriminant validity was found. Test–retest stability over 6 months was satisfactory. Results support the reliability and validity of the Finnish adaptation of the SAS-A, and further indicate that gender differences in adolescents’ social anxiety may vary across Western countries.
vorige artikel Comparison of Saliva Collection Methods in Children with High-Functioning Autism Spectrum Disorders: Acceptability and Recovery of Cortisol
volgende artikel Experiences of School Bullying Among Internationally Adopted Children: Results from the Finnish Adoption (FINADO) Study 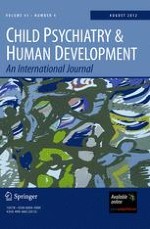 Prognosis and Continuity of Child Mental Health Problems from Preschool to Primary School: Results of a Four-Year Longitudinal Study

The Basic Empathy Scale: A Chinese Validation of a Measure of Empathy in Adolescents